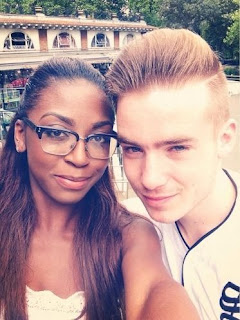 Interracial dating in the UK is fairly common and accepted.  In fact mixed race couples are even more common in Britain than in the United States.  It’s estimated that 50 percent of black men in the UK are in a mixed race relationship.  Mixed race children are also higher in number than black children.  Some believe that within ten years, mixed race children will be a majority, surpassing the broader categories of black or Asian.

Of course, that’s not to say that there won’t be some moments of awkwardness, as it is simply human to misspeak and offend one’s neighbor on occasion.  If anything mainland countries like the UK have missed out on the multiculturalism of Islandic people who have been exposed to interracial and multi-ethnic dating for quite some time.  In the UK, there is an unprecedented time of freedom when it comes to interracial coupling, whether it’s out in the open or depicted on television.

Some youngsters though, consider themselves mixed race and not black or Asian exclusively.  If anything, this may occasionally rub the label-conscious as offensive, since they have always grown up with the understanding that it was a matter of pride to be black, Asian and so on.

If anything, this just speaks as to the progressive social awareness happening in Britain and other parts of the UK.  In fact, racism is a far more pressing issue in countries like the United States than in Britain, given the outrageousness of their media.  Acceptance and tolerance have come a long way over the past several decades.

This doesn’t mean that things are always perfect, especially among the gossip circles.  For instance, when Robert Pattinson started dating FKA Twigs, gossip websites definitely “noticed” that FKA Twigs was not white.  She was labeled as an “alternative” choice for the actor.  Her dark skin was more or less what they were noticing, though she is not purely black either.  She is a mix of Spanish, Jamaican and English.  Some writers even joked that Robert was being “edgy” and that he would eventually grow out of this phase.

A shame, that being edgy is still associated with dating people of different races and ethnicities.  And true, families and friends may notice that you are doing something that may “cause controversy”.  But as long as you don’t have a problem with it, and your partner doesn’t, there’s no need to worry about the perceptions of others.

However, by in large, interracial dating in the UK is not as “edgy” as it would be perceived in other countries, so the bigger question is, why are you not dating outside your race and ethnicity if you feel a strong attraction there?  There’s certainly nothing wrong with going out and meeting new people and seeing if an attraction develops.  Now that you can date using Internet romance sites, it’s much easier to find someone compatible and intellectually compatible, in addition to having physical chemistry.

Why not see what you can find?  A life is hardly worth living if you never take a chance and find happiness on your own terms!
Newer Post Older Post Home